After a blissful break where I literally played TSW, NWN Online, ESO (Beta Key is mine harhar) and did various small side-trips in RL, I received news about a Sim that was under construction. A Game of Thrones sim. Oh trust me, it was not a decision that came easily. I asked a lot of question, and spent a lot of time taking long walks while thinking if I even want to do that again.

But then again, people really encouraged me, and finally I did the leap of faith again.

It was a decision that I made, in the middle of chasing appartments (I finally found something, and will move on the 28th this month, closely followed by Japan trip nr 2 end March!), a busy job schedule and a good few gentle nudges from the very, very few I had kept in contact with. But still, a decision that finally got easier, the more I thought about it. And the more people kept reassuring me.

I love it. Finally I feel like I get to play the role that I had always wanted to play, a Martell sibling. Last time I had that feeling was in Crownsland, which went wrong and didn't survive but eh, that was not my fault nor my char's, but weird Owner-stuff happened. With BWB, and a good 30 ppl on sim at any day of my timezone online times, a lot of exciting storylines, an open Keep for all to weasel around, a family that is both weird and adorably awesome, and gradually making new friends to whom I am just allowed to be myself, and a lovely someone who will nudge me in time if work and crazy RL makes me antsy in the Game...I feel happy. Finally again.

It feels like a circle finally completed. In a good way. Life, after a lot of personal struggles, seems to show itself on its happy and fun sides again, after what felt like an eternity of gloom and being too busy to enjoy the simple things. It is as if someone had seen me struggling hard, and had gently lifted me up toward the sunshine. I hope it will last. Thanks to all those that had made it possible. For those that still love having me around, for those that came to fetch me when I was about to throw it all, for good talks, good times, good friends, good chimes, and the best of all storylines.

Posted by Talismere at 5:42 PM No comments:

Rambling is what Talis does, and she does it whole lots! Pre-2014!

Am all excited. Got invited by good buddies to get really badly drunk, sing Karaoke songs like ain't no tomorrow coming, eat yummy stuff and topple over some hours later on a Couch. Sounds like a really good plan to me XD. I kind of needed plans, and slowly but surely stuff starts to get easier.
Somehow I sense that 2014 might become a wonderful year. I worked so hard these last months, and didn't really took care of myself through it. Not even a bit, but I'm going to try and fix it all, step by step. And I truly can't wait to be in Japan again, to meet with a good friend there and have a beer over delicious food, and to just get lost in Tokyo and surrounding. Soaking up the good stuff like a sponge.
Mostly for one-two hours on weekdays I'm still having fun in Neverwinter, then I get exhausted from work and sneak to bed with a book, which also was a great idea, cause it gets me to a better sleeping schedule than being on SL and oh I missed to read longer than those twenty minutes on the bus or during that half hour on lunch breaks. Tomorrow I'm going to buy a pretty (hot) dress, all the Christmas presents for Family and friends, and will finally get to empty my cave (not my Office, my actual mini-cave with stuff no one needs anymore, especially not me xD).
Talking about SL, just found this Picture and as I am not using my tower anymore, I was happy to have found it nevertheless and wanted to upload it, as I still do think that this is one of the prettiest selfies I've ever taken of my Avatar, and it so underlines everything and all I feel or felt at that time. It's ridiculously perfect. At least for me. 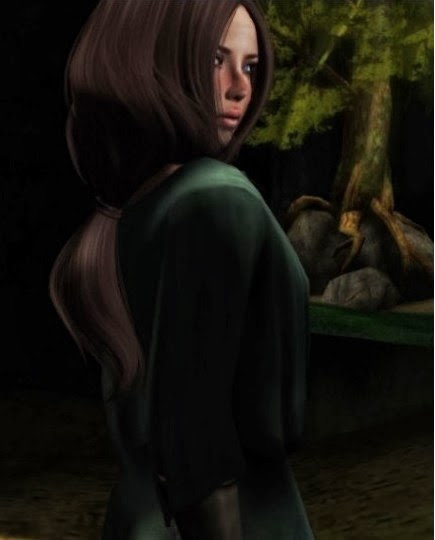 Anyways, for you out there, I hope this year had been fabulous and easy, and that the next year will be just as fabulous and easy to you. There'll always be bad news that might topple you over (i like the word topple as of late), or days that strain the shit out of you, no kidding. But seriously, life's not all about work, it does good to take a step back and look around, see who's there, or what's there.
I do believe that no story should ever be better than the story of  your life on its own. Though there might be no happy ending, but it's always true that one needs to fend for oneself and strive for those small, good moments, cause those are what make simple things as facing a new day, just that little bit easier.
So that'll be my wish for those reading: Assemble a lot of happy moments, big or small ones, in 2014. Capture them, let those warm you up and don't waste too much time online. It is wasting time, I've done it way too much for a certain reason that I do think I have overcome finally (we'll see in 2014 hurrhurr)
Socializing in Real life has always been fun, and I can't believe that I hid away so long over being hurt. It seems like the feeling of being hurt, is an arch enemy but that's no good, I should be stronger than that by now. After all, I'm a fabulous, hard working, smartass woman. I know what's out there, and it might not always be cherries and rainbows but I do think, as flawed as I am, that I too deserve a little something. Such as, perhaps, someday putting the past aside and to perhaps, someday, fall in love again. I'd like that to become true in the next year, I haven't lost my spark just yet. It just needs to be dusted off, and a bit of trust. I'll try that thing again. Last time I did it, went horribly wrong and it took me five years to get over it. This time, perhaps, I'm better braced.
Geh, I rambled on and on again, but sometimes, and that too is a purpose of a blog, writing it all out just makes it that little bit easier to stick to the plan. Or to realize what it is what you want, or feel. It is good, to feel. There are times when there is no feeling at all, and that's bad. It's been that rough of a year, 2013. Certainly one I hope to forget about quickly. Can't wait for the new year to start, although it's a ridiculous concept but, a big part of me believes, insists and aims for 2014 just becoming so awesome that it'll totally make up for the madness which had been 2013. It needs to, and I'll do it so. With all I've got, if not now, then never, that's how it is. So all the best for you guys, and I'm out of here til 2014 :-).
﻿
Posted by Talismere at 11:37 PM No comments:

...is evil. No kidding. Again, here I thought around 7pm "Wait...did you had breakfast? Nope. Did you had Lunch? Nope...Let's go to the Chinese Restaurant yay!" which I did.

As usual, that mean, mean menu card spoke of yummy fried things, dumplings and the likes. Now I am full...of regrets.

Every fucking time I tell myself "Don't go there...the food is evil. You'll regret it." and everytime my brain goes "Naah, come on, you had no nothing today, the fuck can go wrong, go, eat, it's yummy and you want it!" Yeah.

I'll be on the Couch hugging myself for the next two hours or so.

So I'll be playing Neverwinter and Elder Scrolls Online if I have the time, cause it's fun.

Last night, for the first time in a good while, I literally laughed my ass off cause my Rogue got flung up to the ceiling while casting and got stuck on a wooden pole, couldn't free herself ,and the laughing crowd of the Team below suggested suicide as a last way out, which I dramatically performed, Samurai style. T'was a good blast, with lots of good quotes cracking me up through it all, guess none will ever forget that Den *chrchr*.

Will also have to prepare the big moving in january/february, visit Japan for the second time in March-April, and add some real life to it all. Finally moving to a place with a bit of a nightlife hopefully so I can go out and be with real life people.

Defeating a Troll (no...actually a Troll)!

Harrowdale had a really splendid diced Event taking place tonight.
After a week of suspense and guessing over piles of bones, a raging troll approached the Woods (NPCed by one amazing OST - Dice and Posting Order by Acilius - smooth!).
Awesome Organisation done by all those working on this one, we had a blast, and this kind of Quality RP is what keeps one coming back. Harrowdale has lately found a constant number of excellent Players, increased its traffic and became a melting pot for both hilariously creative evil chars, good chars and I don't give a fuck chars. Forgotten Realm RP at its finest. Do ensure to wiggle in, you know you wanna! (and look at how stylish we all are *dies*).

Posted by Talismere at 2:30 AM No comments: 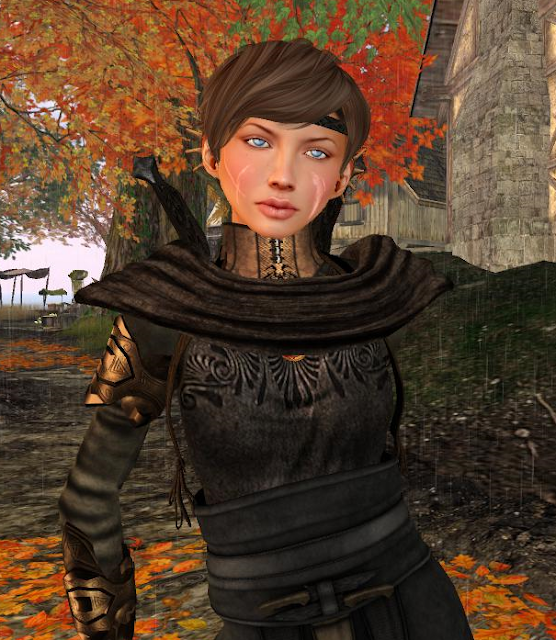 Two more scars added to the Talis-face. Wasn't all that smart to tell a Tiefling that "The Kitty needs to leave". Tieflings have mean claws, just saying. Got scratched up good, and (Kind of unfortunately, as I brought up the fight) broke a rib to the Tiefling x/ upon which she fled in a mass of shadows. RP is generally fun, although the sim still could need a bit of traffic, it's great to have those small but high quality RP Scenes where everything and all can happen. At this point, with my truly grumpy and foul mouthed char, it is a ridiculous amount of wonders that she's still alive *laughs*

Posted by Talismere at 8:00 PM No comments:

Feeling cold? Get a cloak! 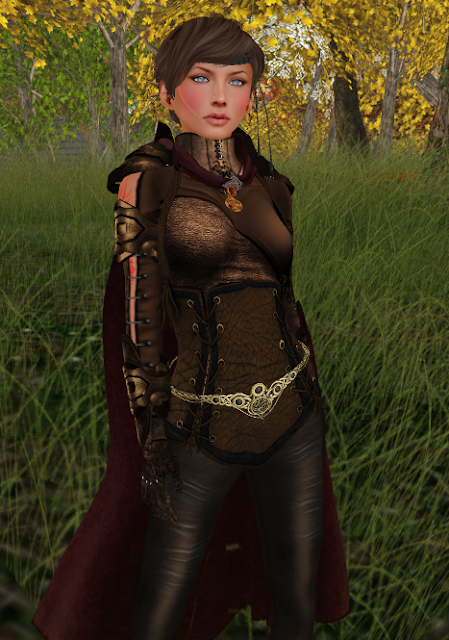 I'm too picky to find a suitable, small blade to add to it, might follow later upon which I'll switch the picture. I did not linked every item cause most of them are names you know.
Posted by Talismere at 8:06 PM No comments: